My journey with Bright started in April 2015, a year after the company I cofounded, Signal, was acquired. My tenure had come to it’s logical end, thus I immediately started thinking through what was next. One idea in particular — an engine to help companies grow faster by ingesting their data and providing descriptive, predictive, and prescriptive analytics — got me really excited. We had spent years building the descriptive bits of this at Signal, and had made significant progress by the time we were acquired (in fact, it helped convince the acquirers we knew what we were doing).

I collected my thoughts and sketched a proof-of-concept: 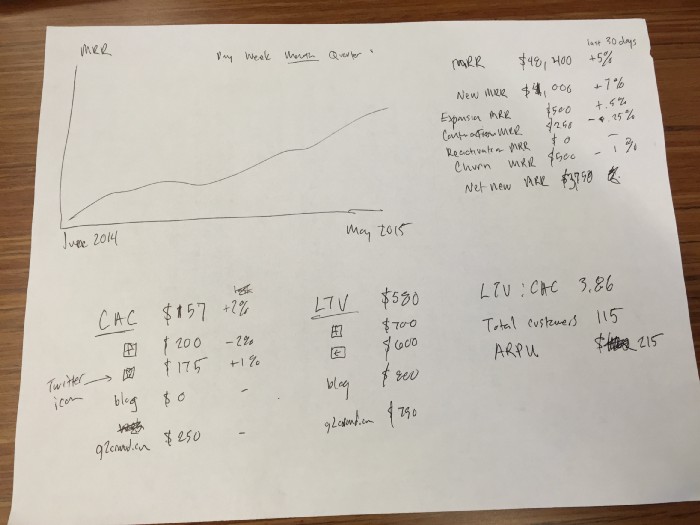 I shared this with Paul Maeda, a fantastic designer I had recently met, and he turned that into this: 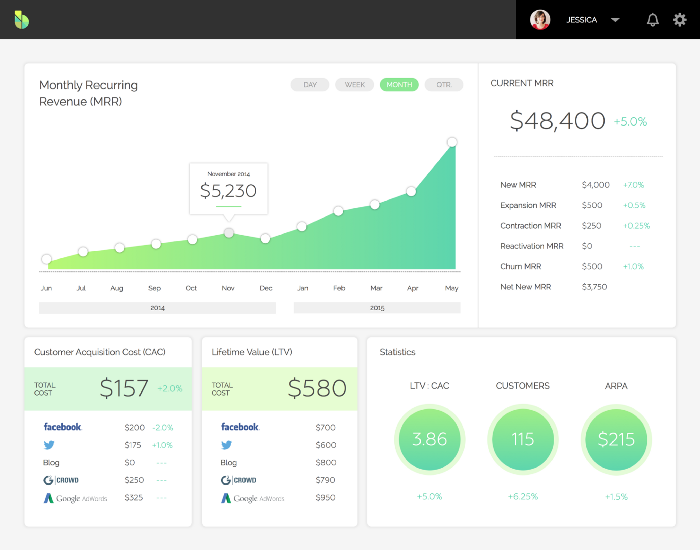 This was a nice visualization of a complex problem. Merging marketing attribution, spend, and revenue data in a cohesive view is hard. Most companies struggle with each data set alone. I quickly built a pitch deck and sent it to a local VC for his feedback. We sat down for coffee and talked through everything — and he loved it. He told me his firm would be able to invest 500K to get things off the ground, or could wait to write a larger check once the product was in market and getting traction. Though n=1, I took this as a good sign and decided to get to work. Around this time, my friend Doug joined Earth Class Mail as its new CEO. I talked through the idea for Bright and Doug offered up their data as a test bed, as they were struggling with understanding customer acquisition and retention. Questions like ‘who are our best customers?’ and ‘how do we find more of them?’. He also wanted help with a few projects, thus I worked with his team for a few months, and then shifted gears to focus on Bright full-time in August.

Integration with the first billing system was fairly easy. I had spent seven years working through different data models at Signal as we experimented and changed our pricing, thus already had an ideal structure mapped out in my head. I started ingesting the data and building views on top of it and had a proof of concept ready by October that showed subscription billing analytics like monthly recurring revenue (MRR), customer churn and MRR churn. It also provided some insight into which discounts and pricing plans were most effective. I didn’t have any other types of data yet, but had enough to show that Bright was valuable.

The next six months felt like a blur as I continued to iterate on the product. I integrated with a second billing system and started to add beta users. I flew to San Francisco in February 2016 to attend SaaStr Annual and drum up interest in Bright. I met the CEO of the company that I built the first integration with and gave him a demo of the product. We hit it off and he invited me to join him for dinner that night. Over dinner he relayed that their customers were demanding better tools for insight, their team could not move fast enough, and we should join forces. We agreed to continue building a relationship, but the timing was off for such a move.

After returning to Chicago, I ran into Troy Henikoff in the hall at 1871 and told him about Bright. I had considering applying to Techstars and was curious to get his feedback. I gave him a quick demo and walked him through the progress I had made over the past six months. He encouraged me to apply, and I submitted the application just under the wire (see videos 1 , 2 — oh so bad!). Techstars Chicago Managing Director Brian Luerssen subsequently reached out, and I worked through three rounds of interviews with successively larger amounts of Techstars folks. Surprisingly, the acquisition conversation resurfaced as the company I met with at SaaStr Annual was being acquired themselves. I flew to Texas to meet with the team leading the acquisition as they realized this was a hole in the company they were acquiring. While there, I received an email from Troy and Brian to jump on a call — a few hours later they gave me the fantastic news that Bright been accepted into the 2016 class of Techstars Chicago. Woot! At this point, I was faced with the decision to sell early, or keep moving. While I had a huge amount of respect for the folks offering to acquire Bright, I didn’t want to sell — I hadn’t even brought the product to market yet. The opportunity cost was too high, and Techstars would be a massive accelerant. I chose Techstars— and spent three months (July through September) working on the business with 9 other companies.

Techstars was broken into three 30-day chunks — mentorship, growth, and demo day preparation. I came into the program with what I felt was a strong product roadmap and plan to tackle it. Troy and Brian relayed that it’d be a challenging summer as a solo founder. They told me I needed to hire at least one person before the program started as I wouldn’t be able to tackle more than 10% of what I wanted to accomplish during the program. Now that I had a small amount of capital to work with, I posted a job to AngelList, started interviewing engineers and found someone the week before the program started.

After things kicked off, I also reached out to my friend Fredrik to see if he’d be interested in helping too. I had worked with him while helping Earth Class Mail and loved working together. He and his fiancee Emma had planned to go on holiday for three weeks, thus he offered to help for a few weeks if I’d pay for their flights and lodging. We spent the next three weeks cranking — Emma on customer development and market research, Fredrik on customer acquisition attribution. The product was starting to come to life. The interface was rough (and admittedly disjointed), but customers could see how their marketing efforts tied to recurring revenue, lifetime value and churn. A company could evaluate all this by connecting to their billing system and deploying a few lines of Javascript to their site. It was awesome!

Shockingly, the engineer that I initially hired didn’t work out. He left to start his own company — one month in Techstars and he had the bug. I talked to Fredrik about joining the team as cofounder and CTO before he left Chicago, and he was in. I could not have been more thrilled…he was the perfect fit as CTO. We also agreed that we needed our friend Brian Flanagan to lead product and round out the team. I had already been trying to recruit Brian for months, but he was resistant as he was building out a bookstore and focused on that. Nevertheless, we kept asking him to help and he eventually ceded :)

I then recruited Tim Grace to the team. Demo day readiness had become a full time activity, and I needed help. Tim and I discussed him joining as cofounder and COO, but would later agree that this role didn’t make sense given our early stage and limited capital.

In September, Fredrik and Brian flew to Chicago to help Tim and I finalize everything for demo day. On Thursday, September 29th, I pitched to a full house at the House of Blues in Chicago:

Super mentor, investor, and now friend Jordan Buller introduced us. Tim was clicking through the presentation back stage while Brian and Fredrik sat in the balcony building the new marketing site. After a month of preparation, the day felt like a big success.

Fredrik, Brian and I at demo day (missing: Tim) 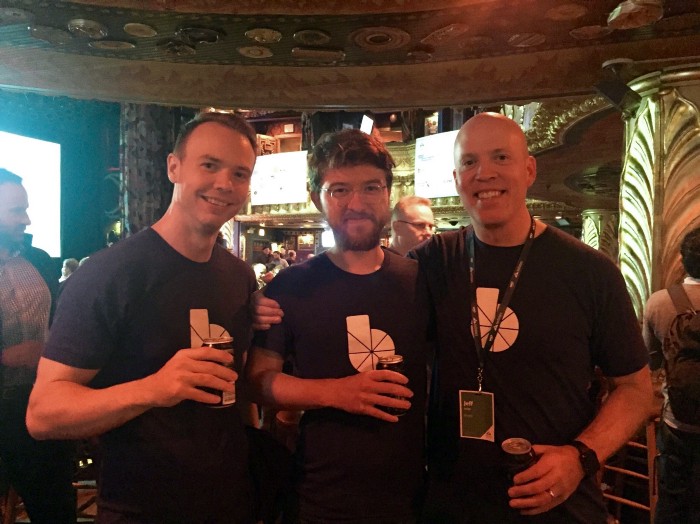 My wife joined us for dinner afterwards, and the team talked through next steps. We agreed that the product that I had initially built was a good start, but not what we wanted to bring to market. You can see the stark difference between the application and demo day videos above, and the launch video below. What I had built was a concept to open up insights into revenue metrics. What we wanted to bring to market was a product that consumed all your data to provide your team with actionable insights — a helpful copilot if you will. With demo day done, Fredrik and Brian flew home, Tim took some time off, and I flew to California to ride in the Levi’s Granfondo with friends.

Once we regrouped, I focused on fundraising and Fredrik started building a new backend for data processing.

Tim and I hosted #BrightConf in Chicago on October 14th: 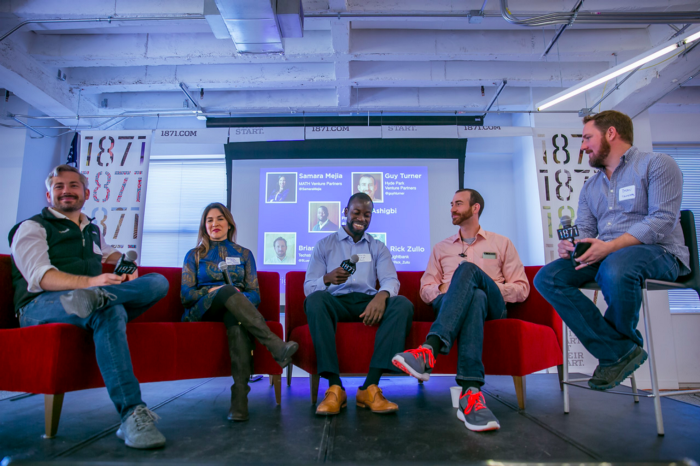 Over 23 speakers from around the midwest shared their knowledge in the 1871 auditorium throughout the day. It was awesome! Tim and I were relieved that the day went so well (we really pulled it together in two weeks), and we learned a ton about planning a conference.

Brian joined the team full time in November as cofounder and CPO and went to work building the new frontend. The team spent the next four months building, and fundraising.

We finally launched Bright on ProductHunt on March 14th and finished the day in third place: 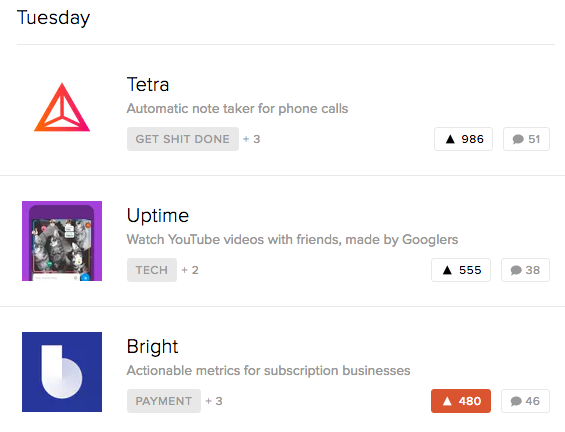 Here’s a look at the product in action:

Over 200 companies signed up to try Bright out. It was awesome! These companies were excited and providing a ton of helpful feedback. This is when things started to fall apart.

I had focused my fundraising efforts in Chicago figuring it would be ‘easy’ given the problem set Bright was tackling, and the sale of my last company. Investors weren’t convinced — they either wanted to see more traction (we had none as we stopped selling the proof of concept that I built and agreed to not yet charge for the product we launched in March), weren’t convinced that the market was big enough, or weren’t convinced that we could compete against the big analytics players (Google’s investment arm had just invested $81 million into Looker). I was frustrated that people weren’t willing to take a chance on us at an early stage, but that was the reality of where we were at. The team couldn’t keep working without covering our basic needs — this was especially true for me with four young children. We knew bootstrapping Bright wasn’t realistic given the infrastructure and team required to build the product people were excited about. We did have a strategic investor interested, but the term sheet they sent over would render the business DOA as they wanted too much of the company early on.

Fredrik, Brian, and I had previously agreed if we couldn’t raise money by the end of March we’d all take a break to figure things out. We hit the deadline without success. I continued to fundraise and work on the product for a few months, but decided to call it after not making much headway. It’s hard to admit to failure here, but that’s what happened. In the end we couldn’t get everything lined up — we just couldn’t make it all work.

Thank you to everyone that helped Bright along the way. Your support has, and will always be, invaluable.